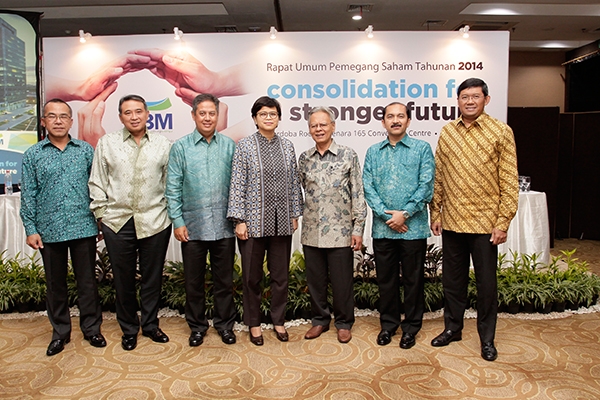 Jakarta, May 19, 2014 – PT ABM Investama Tbk. (IDX: ABMM) held its Annual General Meeting of Shareholders (AGM) at Menara 165, Jakarta. In the AGM, ABMM’s shareholders agreed the distribution of cash dividend amounted about US$1.15 million or 25% of the 2013 net profit.
ABMM President Director Andi Djajanegara said, “Although the coal industry is facing an extremely challenging period, we manage to distribute dividends from our 2013 net profit, a reflection of our commitment and utmost appreciation to ABMM’s shareholders and investors for their supports to the Company’s business growth.”
The shareholders approved all items on the AGM agenda including the Company’s 2013 annual report, and ratified the consolidated financial statements for year ended December 31, 2013.
Through its subsidiaries, ABMM accomplished some significant operational achievements in 2013, which are the highest results in the Company’s history. Among these achievements, coal production and sales volumes of 5.0 million tons and 5.3 million tons, respectively, rental services for the mining contractors to produce 12.5 million tons of coal, and electricity production from temporary power of 4,642 million KWH with total installed capacity of 1,113 MW. ABMM booked total revenues of US$777 million with EBITDA of US$149.4 million in 2013.
"We are grateful that ABMM managed to report positive performance in 2013 owing to the efficiency steps and the reinforcement of our business process. This strategy will be our strength once the coal business recovers. We are optimistic that the ABMM’s future will remain sound on the back of solid strategy and business process as well as strong synergy between subsidiaries," Andi added.
The shareholders also agreed to the use of the Company’s 2013 profit attributable to the owners of the parent amounted US$4.6 million. US$0.1 million will be set aside in a reserve fund, as stipulated in the Article 70 of Company Law No,40, 2007. About US$1.15 million or 25% of net profit will be used to pay cash dividend. Meanwhile, about US$3.4 million from net profit will be appropriated to retained earnings.
The AGM also approved the appointment of Adrian Erlangga to the Board of Directors in ABMM replacing Willy Agung Adipradhana, whom ended his term on this May. Adrian, Indonesian citizen, earned his MBA from the Golden Gate University, San Francisco, CA, USA and his law Degree from Universitas Padjajaran. He currently held a Director position at PT Reswara Minergi Hartama.
Accordingly, the composition of the Board of Commissioner and the Board of Directors of ABMM as follow:
President Commissioner : Rachmat Mulyana Hamami
Commissioner : Mivida Hamami
Commissioner (Independent) : Erry Riyana Hardjapamekas
President Director : Achmad Ananda Djajanegara
Director (Non-Affiliated) : Syahnan Poerba
Director : Yovie Priadi
Director : Adrian Erlangga
The AGM also appointed the Purwantono, Suherman & Surja (Ernst & Young) Public Accounting Firm, which will audit the Company’s financial statements for the year 2014 and authorize the Board of Directors to determine the honorarium of the public accounting firm, as well as other requirements.
The AGM also approved the change in the use of the Company’s Initial Public Offering (IPO) proceeds, as the remaining proceeds that initially allocated for the expansion purposes will be reallocated for the Company’s and its subsidiaries’ additional working capital.
ABMM Director Yovie Priadi said, “Additional working capital from the reallocation of IPO proceeds will create greater room for ABMM to execute its business strategies and to strengthen the future performances of ABMM and its subsidiaries.”
The AGM was attended by the ABMM’s shareholders and achieved the quorum required by prevailing laws and regulations.
ABMM’s focus in 2014 and beyond
As a long-term player in the energy sector, ABMM will keep its focus on developing its business by prioritizing several aspects in 2014 and beyond, including the completion of the Aceh coal mining project to be commercially operational, optimizing its power business by expansion in the power generator business, as well as strengthening the synergy among its subsidiaries in order to enhance the Company’s revenue.
In 2014, ABM will focus on completing its integrated coal project in Aceh, which targeted to start commercial operations in 2H 2014. The ABMM coal mine is the largest mine in Aceh with total estimated coal reserves of around 169 million tons according to the JORC estimates. ABMM is targeting an annual coal production capacity of 7.5 million tons in three years after the start of its commercial operation with initial coal production target of about 2-3 million tons in 2014.
“Our coal mine in Aceh is the pioneer for a large scale mine. The entire production chain for the project in Aceh will involve ABMM subsidiaries. This shows the synergy within ABMM as a group which will be carried out in a prudent, effective and efficient manner,” ABMM Director Yovie Priadi explained.
In addition to its commercial coal business in Aceh, ABMM will also strengthen its power business by targeting an additional power generation capacity of 300–500 MW in 3-5 years through its organic and inorganic growth strategy.
Based on the data from the state electricity company PLN, the electricity demand in Indonesia grew by an average of 8.5% per annum. In 2013-2022, additional 60 Giga Watts (GW) of electricity power is needed, in addition to 58,000 circuit kilometers for transmission networks and main stations by as much as 134,000 mega volt ampere (MVA). Currently, the electrification ratio in Indonesia is only at 70%.
As for the contractor business, ABMM is exploring opportunities to penetrate into the non-mining sectors such as construction, infrastructure as well as oil and gas. The exploration of opportunities in those sectors is part of ABMM’s strategy in order to optimize the use of heavy equipment which will financially boost the Company’s revenues.
"By optimizing these heavy equipment assets, we expect to earn business opportunities in the growing construction, infrastructure, as well as oil and gas sectors in Indonesia. This strategy will bring additional revenues that will benefit the Company as well as allowing for more solid synergies among ABMM subsidiaries in the future," Yovie added.
Andi Djajanegara stated that as a long-term player in the energy sector that concentrated on creating sustainable business growth, our focus is to build a strong foundation to ensure that ABMM’s business can create maximum corporate value for all of our stakeholders, including investors and shareholders.